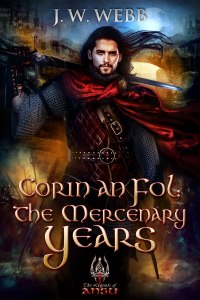 He missed the river, but at least the pines broke his fall, and Corin was allowed to crash and groan through their twiggy limbs, before impacting the carpet of needles below. Ouch didn’t cover it. Strangely he was alive, with nothing broken — just a host of new bruises to add to his old ones.

Corin glanced up at the high ridge. He could just make out the shaggy shapes of his recent captors jumping about up there. They looked a bit stressed. Maybe the idiots had believed his yarn about the gold. Greed so often makes fools of men. Corin grinned; the day was improving. Sort of. Now — time to get Clouter back and be about his business…

The camp lay twenty miles east awarding extensive views of the desert shrub. That and a glimpse of blue haze hinting the sea, and some murky towers close by. Corin knew them for the swelter-pot den of villainy and vice called Cappel Cormac.

Corin found Krugan’s camp easily enough. Previously, he’d spent a few days scanning the region, hence discovering that cliff and his canny escape. It pays to keep your eyes open in this life. Dusk was approaching, and a cluster of seven shaggy figures sat laughing around a fire…

…They were laughing at Ugami, who still nursed a bruised chin and mourned the loss of two front teeth. Krugan had sent men with dogs down to that river, but they’d found no sign of the mercenary. Most assumed the water had carried his body far from the place. But Krugan and Ugami weren’t so sure.

“Keep your wits about you,” Krugan growled as their leader took to his sack. He’d had a long day, and tomorrow he’d join the rest of his men up in Cappel. Once there he’d organize an accident for that meddling merchant up in Port Sarfe. Krugan smiled picturing Silon’s head on a stake. That image enabled him to relax sufficient until his snores filled the desert night.

Krugan’s men diced long into the dark as the fire spluttered and at last gave out. Weary and wine-sodden, they claimed their blankets. All save Ugami. Big Ugly was left alone on watch, nursing chin and wounded pride. He didn’t see the shadow behind him. Nor did he feel the rock as it battered the back of his skull…

You’ll receive a free copy of Corin’s first adventure in the V.I.P Lounge The weekly newsletter is free to join and you can unsubscribe at any time. You can also enter the new Giveaway pictured above –– just click this Link To access the books on Amazon.com Click Here

Thanks for reading and see you next time!