Glimpses Of The Otherworld

Have you ever stood in woods during summer, a light breeze lifting your hair and the warm sunshine making you smile as the soft drone of bees accompanies birds chirping nearby? You turn on a whim hearing the chime of distant water you hadn’t noticed before? Or maybe look up glimpsing a hint of movement, some creature –- perhaps a fox or deer –– watching you silent and hidden, but closer than you think.

When surrounded by nature and alone it’s easy to imagine you’re being watched. Quiet, patient eyes surveying you from a distance. Minds, ancient and magical and mysterious, gazing out from different dimensions. A flight of fancy? Perhaps a whim of imagination? Trick of the light? Deja Vu? Or maybe it’s just that you’re alone in a tranquil place with your memories, the world turning at your feet and cheerful nonsense in your head.

But what if someone is watching? I mean –– why not? Shit happens. We live such busy lives it’s only when we escape to solitude and nature as when we can stop and think and look around. Steep… Tune in to your surroundings. Feel the earth breath. Reflect. Imagine. Do weird Tai Chi stuff. That’s when they find you –– when you are reflecting. Those watchers in the woods.

My late wife Rae once told me of a time long ago when her Aunty Pat was walking back at dusk from a summer dance in remote rural Donegal where they lived as children. She’d sensed movement and turned to see a small figure watching her from a stone. Aunty Pat was not one to imagine such fancies. A trick of the light perhaps? Or maybe just an old leprechaun enjoying a fine summer’s eve.

Many cultures tell of the Little Folk, the Faery, or Fay (Fey) the name corrupted and sillyfied (Just made that word up, btw) into fairies with twee little insect wings by Victorian gentlefolk with too much time.

Norse Myth mentions Faerie. Welsh tales speak of the Twlwth Teg; the Scots have the Aos Si, and Kelpies, the Irish the Sidhe (Shee) diminished descendants of the Tuatha De Dannan dwelling beneath the hillsides. There’s also the Banshee, leprechauns, the Pooka and many such odd folk rumored lurking in the Emerald Isle.

The Cornish speak of Knockers and Spriggans creeping about way down there in the tin mines. (Ask Ross Poldark.) Even amongst the reeds and wildfowl of the lonely Norfolk Broads, there are stories of mysterious Tam Lin. Throughout Europe tales abound about the Other folk: Dryads, Nyads, Imps, Goblins and Hobgoblins, good faeries and bad faeries.

Tolkien’s elves are noble and heroic, but their counterparts from Norse Myth are more akin to sinister fairies with their tricks and pranks and sudden acts of cruelty. Beautiful and complex, yet treacherous, like the infinite depths of the ocean. Otherworldly. To cross such a being was to fall upon ill fortune.

‘Childe Rolande To The Dark Tower came‘ A tale of Faerie, Browning’s poem influenced Lord Dunsany’s The King Of Elfland’s Daughter, and Andre Norton’s Witchworld series. More recently there is Stephen King with his brilliantly twisted Dark Tower series and movie.
Believe in them or not, Faeries are not to be messed with. I don’t care for the notion of little busy-bodies sitting on mushrooms and stealing children’s teeth in exchange for coin. Borrowers and spiteful imps. They need to get out more, get a job or something.

But there are echoes hidden behind all that random imagination. A larger question of identity –– who we are? It pricks our subconscious, allowing our minds flicker from the every day and glide out beyond self-imposed boundaries where anything is and should be possible.

We live in a spinning spiral of stardust. Why shouldn’t Faery exist somewhere within its fabric –– even if only in our dreams?  Close your eyes and imagine. Faery, a blue/silver shimmering twilight realm waiting for you just beyond the setting sun. And If that doesn’t work pour yourself a large gin and tonic. Don’t worry, be happy.

Cornish Knocker Captured In Mine Shaft And Fermented.

Here is Wikipedea link about the Wee Folk
Enough About Fairies –– Time For Some Swords!!

The ax split roots an inch from his head. Corin opened his eyes to see its owner grinning down at him. Borgil always had a warped sense of humor. Corin smiled up at him as a snowflake settled damp on his cheek. It was nice to see the sky again.

“Stop buggering about and bring him here,” a lazy voice announced Hagan had tired of their game. Borgil shrugged and reaching down grabbed Corin’s soggy cloak and hauled him out of the briar patch like cork pulled from bottle. Once on his feet, Corin followed the axeman to the tall leaning stone where Hagan watched the river far below.

“You’re late,” Hagan turned and surveyed Corin with those cold gray eyes. The eyes of a calculated killer and a man without fear. “Silon said you’d arrive two days past.”

“Shit time of year to travel,” Corin replied, flapping his arms to get his circulation going. “Nice to see you, Hagan.” Arms done, Corin rubbed his hands; these were still bleeding from his recent encounters with sharp things. “So, what’s this job? Silon never explained.”

“You’re a cheating bastard,” Hagan’s cold eyes narrowed as he studied Corin’s face. “Not going to own up to it, are you?” Behind Corin, Borgil leaned forward and shoved him hard onto the path. “Leave it,” Hagan motioned the axeman back. “We need Corin an Fol’s longsword for this job. Whether we let him live after that…” Borgil’s beard cracked open revealing that toothy smile again.

“The dice were loaded,” Corin looked pained. “Not my fault; they weren’t my dice. I’d acquired them the night before if you remember. In a fair contest. Not my fault the loser turned out to be a shifty bastard.”

“A shifty dead bastard,” Hagan flashed Corin a rare grin showing perfect teeth. Hagan had always looked after his teeth. “My knife caught up with his throat the following day. Before I killed him, the thieving sod told me you knew about the dice, hence my disappointment and vow to gut you too.” Borgil’s grin widened hearing that, and he shoved Corin again, just for larks.

“Does he have to do that?” Corin had never much cared for Borgil. Badger Borgil they called him, on account of his strange eating habits. He’d been with Hagan for years. Borgil made to shove Corin a third time. Mistake that. Snake swift, Corin spun on his toes and grabbed the big man’s arm, pulling him off balance and tripping him. Borgil sprawled, and Corin followed up with a sharp kick impacting the axeman’s groin. Borgil groaned and rolled. Hagan watched on without much interest.

“We’ll let it be,” Hagan shrugged. “I was hurt, Corin. I’d thought we were mates down there in the dust. Mercenaries in Permio together, watching each other’s backs. Then you pull that shit stunt.” Hagan turned his cold gaze on Borgil, still rolling on the wet ground. “Get up you fat lazy twit.”

Borgil complied and glared at Corin, who rewarded his loathing with a beautiful smile. “Glad we’ve ironed things out,” Corin said. “Now, I’m hungry, cold and damp. I need ale and food and shelter, and I trust you can provide those? After that, we’ll talk business.”

Hours later in Hagan’s camp, as Corin rested in a warm dry blanket by a crackling wood fire, his belly full of poached venison and pilfered ale, Borgil approached his captain who sat on a log smoking a pipe. “I’m going to gut him open after the job’s done, just you watch me.”

“You have my blessing,” Hagan rolled into his own blanket. “Now go join the others and get some kip.” They had a busy few days ahead and the ambush had to be planned with precision. Borgil nodded and went off to sulk by the fire. From close by Corin watched him with a cold eye. Neither man slept that night. But tomorrow proved far worse… 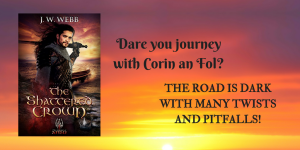 You can view the series so far, and follow Corin and friends by signing up to the VIP Lounge, our weekly newsletter by clicking this link to the Brand New Website!